A Hiker Survives a Big Fall I keep trying to open a book or go to sleep but as the words slip by the same re-run plays over and over in my head. Foot slips. Hands catch. Rock rips. Fall.

I met Steven early that morning so we could get a nice head start on our hike. Steven tells me it’s a 7-mile hike and relatively strenuous one as far as he can tell from the research he had done. I asked him if it was 7 miles there and back or one way, he didn’t know. I was up for either.

We drove off to Tanque Verde canyon where we began our hike — lots of elevation and lots of views. After a couple of hours, we talked to a group of hikers coming down, and we inquired about the window rock formation up ahead. They told us it would be another two miles or so and that the last two were quite the push. She ain’t lyin’. Although we took a wrong turn onto Esperero trail, we were rewarded with an incredible view of the entire canyon we had just traversed from 7000 feet. It was a beautiful December day, and Steven and I shared a beer on top of the world. I set my pack down and pulled out some fleece pants while we hung out before our descent. 14 miles total and all downhill from here.

There was this incredible rock formation reminiscent of a small finger rock, and it looked like I needed to be on top of it. I walked over to check out the climb. There were obvious holds and good footing, and the best section to climb had 40 feet of direct exposure but was only about 12 feet up.

I began my climb to the summit and was there in no time. Hit the Nixon up top for a photo op, breathed in the accomplishment, and soaked up the view and feeling of potentially being the first person to be on this rock or at least one of the few.

I began my decent, but not before casually mentioning to Steven how “70% of mountaineering accidents happen on the way down”. My torso was about halfway down, my hands still quite high when my feet slipped off. One instant I had a stronghold and felt safe; in the next instant, I could feel the rock I was holding onto ripping from the wall.

First in slow motion and then fast forward. I held on and spun myself on top of the rock as I plummeted 40 feet with a 200-pound boulder in my hands. I fell so far that Steven didn’t see me hit the ground, and I hit so hard that I don’t remember the impact. But I remember thinking one thing throughout the fall: “this isn’t happening”. I was knocked out and not responding to Steven. But I was starting to re-dream the hike and the fall, and when I hit I woke back up in a pile of rocks. “That was a terrible dream” is what I thought. So I stood up and began walking up The mountain. I got about 10 feet and began calling to Steven, asking where he was while I tried to make my way towards him. He told me I fell and I needed to sit down. It all sank in. I sat.

I tried to lay down but the pain was too excruciating. The feeling was slowly starting to come back, and it didn’t feel good. “I chipped my tooth!” I yelled to Steven. I was bleeding from my face but it didn’t really hurt; I could just see the blood going everywhere. It got colder and colder up at elevation as the day passed waiting for the helicopter. The one thing going through my mind was just how badly I wanted to live. And that I still needed to drop my debut album. It took 4 hours total of sitting completely still while in pain and freezing before the emergency rescue team reached me. I had a rain jacket, a fleece, and a synthetic base layer on my upper body. For my legs, I had fleece and a synthetic base. My clothing really wasn’t warm enough for being stationary for so long, but it did keep me from becoming hypothermic.

They heli’d me on a stretcher tied to a 150-foot rope, while one of the rescuers surfed the stretcher off the mountain. Unfortunately, I couldn’t see anything but the helicopter above me. Didn’t stop me from trying though. At one point I was asked if I thought I broke my neck. I didn’t have a reference point from which I could give an accurate response.

My family was told to expect a broken neck, back, ribs, a punctured lung, among other ailments that are normally suffered after free falling 40 feet. But after testing in the hospital, it was found that I had a small fracture in my skull, 6 fractures in my wrist, 1 chipped tooth, 1 unrooted tooth, and the only surgery I had to undergo was getting my face stitched up.

Rarely does one get to push the boundaries of living so far, and get to return and learn from the experience. I am very thankful for the lessons and the opportunities still afforded to me after I fully recover. Having a near-death experience can be an incredibly powerful perspective shifter and can show you what really matters in your life.

Still, the mountains are continually calling. I anxiously await my return to the trails, but in the meantime, I’m committed to recovery, and in the wise words of Foghat, “slow riiiide buh dun dun dun take it eeeasyyy”.

You Can Follow Warren's Journey Back to Health and Back to Hiking on his Instagram and Medium.

Do you take hiking photos with your iPhone? Read 15 Tips for Better iPhone Photos. 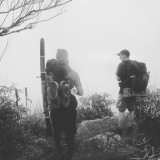 Trail name: Link Enjoys obnoxiously long walks in the woods with his life in a backpack; and sunsets at elevation. Home is where the hammock hangs. Find more adventures on Instagram and Medium.

Also in The CloudLine Outdoor Blog 11 Ways to Stay Warm During Your Winter Adventures Night Hiking: Why We Love It & Our Top Safety Tips