With March being Women’s History Month, we thought it’d be the perfect time to feature influential women in the outdoors — women who inspire us to get outside and protect the wilderness.


This year’s Women’s History theme is, “Providing Healing, Providing Hope” — and while this theme certainly speaks of the caregivers and frontline workers who’ve been tirelessly serving their communities throughout the past two difficult years, we also think it speaks of the outdoors.


As outdoor enthusiasts and lovers of nature, we know how much healing and hope can come from time spent outside. And whether they’re in it for adventure or serenity, these women know it, too.


From thru-hikers to activists, authors to climbers, these women have been leading the way in outdoor communities across the country for more than a century. Read on to learn more about their amazing accomplishments — both on and off the trail.

Emma, or “Grandma,” Gatewood was the first woman to solo-hike the Appalachian trail — and she did it at age 67. In 1955, after raising eleven kids on a farm in Ohio, Grandma Gatewood “went on a walk” — for more than 2,000 miles.

In contrast to all the lightweight, high-tech gear lots of us hike with today, Emma Gatewood carried her supplies in a hand-sewn sack. She didn’t stop after her first hike, either. She went on to walk the trail twice more.

If hiking one of the country’s longest trails is impressive, what about hiking three — in one year alone? That’s exactly what Heather Anderson — trail name “Anish” — did, hiking the Pacific Crest Trail, the Appalachian Trail, and the Continental Divide Trail in the same year. She was the first woman to do so, and one of only a handful of people to have done it, period.

Anderson has also set FKTs (trail-speak for “fastest known times”) for the Pacific Crest Trail, the Appalachian Trail, and the Arizona Trail. To cap it all off, National Geographic recognized her as one of six Adventurers of the Year in 2019.

Another National Geographic Adventurer of the Year, Jennifer Pharr Davis got her start on the Appalachian Trail immediately following college. Like many, the trail changed her — and this first hike was the beginning of a series of unimaginable accomplishments.


Davis returned to the Appalachian Trail several times, where in 2011 she set the women’s record for the fastest known time — just 46 days. In case you’re wondering, that’s an average of 47 miles per day. Davis continues to hike trails all over the world — now with young kids — while speaking on stage and running her business, Blue Ridge Hiking Company.

In 2020, Liz Anjos set the record for the women’s fastest northbound hike on the Appalachian Trail, reaching the northern terminus after less than 52 days.

Having experience running in college, Anjos was rather new to thru-hiking. But she trained like crazy for years leading up to her attempt, and it certainly paid off. Even after developing shin splints a few days into the hike, she continued on — re-evaluating her intentions — and completed her record-breaking hike.

Before these record-setting thru-hikes — even before Grandma Gatewood set off on her walk — Fay Fuller was pushing the previously known boundaries in Washington State. After deciding at age 17 that she would one day climb Mount Rainier, she made this dream come true three years later.

At 20 years old, the young teacher joined an otherwise all-male climbing party with sights on the summit. The year was 1890. Refusing help from her climbing partners, Fuller reached the summit — in a full skirt, of course — to become the first known woman to climb Mount Rainier. She went on to found climbing clubs in Washington and Oregon, inspiring more women to become mountaineers.

A record-setting mountaineer and accomplished scientist, Arlene Blum is a prominent figure in both communities. She led the first American — not to mention all-women — ascent of Annapurna, one of the world’s most difficult climbs.

After several other impressive climbs and treks, Blum wrote two books on the subject of these adventures. In addition to mountaineering and climbing, Blum is a biophysical chemist and Research Associate at the University of California, Berkeley. She’s also the executive director of the Green Science Policy Institute, which aims to prevent the use of harmful chemicals in products all over the world.

Growing up in Alaska in the early 1900s, Mardy Murie knew what it was like to live on the wild frontier. But when she met her husband Olaus Murie, a biologist who spent his days deep in nature, she knew she wanted to live a life that revolved around wild places.


Mardy spent decades in the wilds of Alaska and Wyoming with her husband and kids, serving as unofficial secretary for Olaus’ work. And when her husband died, Mardy’s career and identity as the “Grandmother of Conservation” really took off. The home she and Olaus shared — a ranch in Moose, Wyoming — had become the figurative (and literal) home of the conservation movement. At age 98, Mardy received the Presidential Medal of Freedom from President Clinton for her tireless work protecting wild landscapes throughout the country.

Sophia Danenberg fell in love with climbing while living in Japan on a Fulbright Fellowship. She began climbing in the states when she returned, taking any opportunity that presented itself  and learning as she went. In the Pacific Northwest — where she now lives — she made her first technical climbs on Mount Baker and Mount Rainier. And that was only the beginning of her accomplishments as a climber.


In 2006, she became the first Black woman to climb Mount Everest —  without even realizing she’d be setting this record with her summit. She’s climbed and trekked all over the world, summiting other famous peaks like Kilimanjaro, Denali, and Cotopaxi.


Which Female Outdoor Leaders Are You Celebrating This Women’s History Month?

We couldn’t possibly list all the notable trailblazing women in this post — there are too many to count. But we’d love to hear from you. Who are some female leaders in the outdoor community that inspire you? Let us know in the comments below!

You can also click here to view all the products offered at Cloudline! 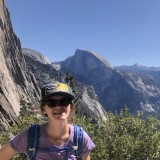 Emily is a copywriter based in northern Michigan. She's happiest outdoors, whether she's hiking, skiing, paddling, or swimming. As a writer, she loves working with companies that inspire all people to get outside. When she's not writing or playing outdoors, you can find her cooking, reading, or hanging out with family and friends. Find more of her writing here.

Also in The CloudLine Outdoor Blog Preparing for Hiking Season: 3 Things You Can Do to Get a Head Start