5 Adventure Films that Will Inspire You to Get Outside

When we aren't out hiking, backpacking or exploring we are usually dreaming up our next big adventure. One of the ways we feed our hunger for adventure while stuck at home is by surfing the internet and watching videos that detail the adventures of other explorers. Here is a collection of short films that have recently inspired our wanderlust and led to the planning of epic adventures this summer. We hope that something you see inspires you to plan something big and that you'll send us a note or picture from wherever your adventures take you!

Joe from Andy Maser on Vimeo.

Joe Riis has the job that every child in the world dreams of: He is a celebrated National Geographic wildlife photographer. He spends his life embarking on adventures to the wildest places on Earth, often for months on end, to observe and photograph animals for National Geographic Magazine. He seemingly has the picture-perfect life. Or does he?

This film tells a more personal story of an oft idolized character to remind that even those who have achieved it all still face many of the struggles that everyone else does. It also celebrates how a man’s love for the wilderness has helped to further curiosity, respect, and protection for the natural world around us.

Adventure Is Calling from Shane Black on Vimeo.

This summer, two friends and myself all left our comfortable jobs of six years to spend two months traveling across the country and teaching photography workshops along the way. We all felt that it was time to take a risk and get out of our comfort zones... adventure was calling us. It was a trip filled with endless hours cooped up in a van, exploring breathtaking landscapes, sharing stories and laughs, meeting some of the nicest people, making new friends, getting to meet old friends from around the country, and sharing our love of photography with others.

This trip was a constant test for me, as we had such short and limited time in nearly all of the spots we visited. In most cases, I'd have to hurry out of the van with all of my gear and find a decent composition in a very short amount of time as soon as we would arrive at the location. It was a constant race against the light.

During those 2 months, we traveled across 32 states , visited 13 national and state parks, and drove nearly 13,000 miles in a (somewhat) trusty old Dodge Caravan... with no cruise control. It was an adventure that gave us many memories that we will all hold onto for many years to come. I think that everybody needs to take a trip and have their eyes opened to just how beautiful this world is and how much is really out there.

3. Towers of the Ennedi

TOWERS OF THE ENNEDI from Camp 4 Collective on Vimeo.

In Towers of the Ennedi, veteran climber Mark Synnott—known more for his far-flung adventures than his technical accomplishments—brings young climbing stars Alex Honnold and James Pearson to the Ennedi to explore its untouched landscapes. Together, Synnott, Honnold, and Pearson endure a long, bumpy drive across the sand flats of a godforsaken country to reach an incredible destination: gardens of towers filled with graceful fingers of rock, bottle-shaped formations and lithe arches. With its stark and poetic footage of camels and rock, as well as jarring images of unpleasant travels, this film shows that sometimes you can have just as many adventures trying to reach your destination as you can have once you get there.

Down To Nothing from The North Face on Vimeo.

This harrowing expedition pushed a group of mountaineers to the mental and physical brink; carving them Down To Nothing. A six-person team from The North Face and National Geographic attempted to summit an obscure peak in Myanmar (Hkakabo Razi) to determine if it is Southeast Asia’s highest point. The expedition members, led by The North Face athlete and Telluride mountaineer Hilaree O’Neill include, videographer Renan Ozturk, climber Emily Harrington, and National Geographic author Mark Jenkins, photographer Cory Richards, and basecamp manager Taylor Rees.

5. When We Were Knights

When We Were Knights from GoPro on Vimeo.

How can you express everything that you want to somebody you love, knowing that if you don't, that might be the last opportunity that you have? That is a reality that we all face, but for BASE jumpers, the risk of death sometimes results in something amazing and unexpected - love. This is the real story of pure love between two friends in the face of risk and tragedy.

Do you have a favorite adventure film? Let us know in the comments below. 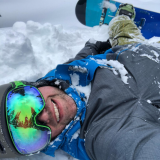 movie provides lots of entertainment and fun facts but what is a great movie without an adventure. I love movies that inspire wanderlust in me, movies that make me want to tour the world. I have learnt from movies that traveling and going on an adventure can actually be fun and one of the best things that you can do with your free time or also as a form of escapism. I also love movies that involve seeking lost treasures or answers to questions that has been posted for a long time. I love the list a lot. please use this link to visit my site for articles as interesting as this one. thank you.