Mt. Elbert: A Moment On Top Of Colorado When I arrived in Leadville, I stopped to grab a late-afternoon cup of coffee from City on a Hill, partly for the roasted goodness, but more to bother the locals for beta on the proximate 14ers. Mt. Elbert, Leadville’s backyard mountain, and Colorado’s tallest peak was just begging to be climbed as the sun silhouetted the mountain from the other side. The orange horizon was interrupted only by the jagged outline of the Sawatch range, with Elbert piercing the sky.

“Yeah, I have beta. It’s a mess.” exclaimed the barista as she handed over a steaming dark roast. “I was there yesterday. It’s waist deep post-holing all the way to tree line.” We talked about the conditions a little while longer. I thanked her for the info and pointed my wheels toward the national forest for a night of camping at the base of the mountain. Seven miles into the forest, I found a backcountry camping spot along a river, where the last rays of sunlight and the shadows bounced across the valley and against the mountains on either side. The sound of rushing water echoed through the increasingly chilling air. Not long later, the only light left was that of the rising moon, and a small, crackling fire I had made to cook up a gourmet ramen noodle dinner.

I woke in the morning in the back of my Jeep, windows frosted over from a sub-freezing night. I scratched off a layer of frost and peered outside to see the moon casting shadows over the mountains beside me, and making the river sparkle like a thousand diamonds.

After sliding on my CloudLine socks and strapping my ice gear to my pack, I began the short hike to the trailhead. My frozen breath floated through the air gently beside me as I rounded the corner into the parking lot. Just after getting on the trail, my headlamp illuminated a sign for the Continental Divide Trail. I followed it to the fork near 10,800ft and split right to keep on my way toward Elbert’s summit. The snow started here. With a rare dose of luck, the snow was frozen enough to prevent the foretold post-holing. I was relieved, as I could see footprints from days before where somebody had sunk well past knee deep. I was able to avoid post-holing up until about 200 feet below treeline. I had my first and only break-through of the day there.

The first drops of the day’s sunlight hit me at just about that time. Within moments I had reached treeline and could see the top of Elbert, still some 2,500 ft. above me. As I gazed up, I saw a snowboarder carving their way down the mountain, and was barely able to hear them yell a living-the-dream shout of excitement. I’m sure it took them minutes to go down what would take me hours to climb up. I stopped to swap my hiking poles out for crampons and a mountain axe; the snow, though only a few inches deep, was slick and steep. As I adjusted my gear, I gazed out into the distance. Leadville’s lights flickered gently, dozens of miles away. A couple of lakes glistened off in the distance, while another, just beneath, was a black sheet of ice.

I dug my crampons into the frozen snowpack beneath and placed my axe into the snow above me as I navigated the slippery final stretch of the mountain. The snow was starting to get a bit softer, and a couple of times I had to lean into the axe to keep my position. At just over 14,000ft, even slow movement was becoming an arduous task. I crept my way to the geographic marker sign just 50 feet shy of the summit. Weathered from the elements and the test of time, the sign corroborates the effort necessary to get to the top of the mountain. Just ten feet above, I stood on the summit. The blue skies contrasted the hundreds of snow-covered peaks in every direction. Shadows rolled across the contour of the landscape. My jacket whipped across itself, making a buzzing sound as a result of the wind funneling up the side of the mountain. But, in this moment, in a way, everything was silent. Everything was still. This is the reward of the mountains. These are the “good tidings”, as Muir would have said. We may not have control of everything in our life, but if we can endure everything above us on the way to the summit, we have done everything we must do to reach the reward at the top. 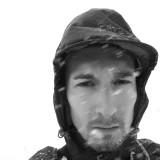